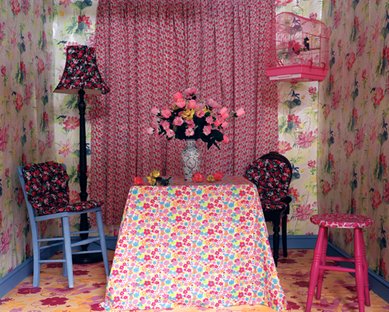 Click on image to see a short film of the installation

What strikes me about the series Chambers’ is the artist’s uncanny ability to stage such a potent mixture of emotions, stirring the status quo.

McEachran constructs sets that seem to brilliantly explicate a range of meanings.  There is a clear and obvious reference to photography and the camera in her title, or more specifically a camera obscura, which of course means a darkened room, or chamber.  Then there is the reference not only to a physical space but a psychical space, or psychogeography.

Swirls of nausea, not too dissimilar from the existential dread described in Jean-Paul Sartre's La Nausée are projected unapologetically towards the audience. Interlaced pattern, upon pattern drag the viewer through the image sounding an inability to rest.  Dystopia is presented in what should perhaps be the most comforting place to retreat and a sinisterly cruel depiction of isolation lies still in a goldfish bowl.

“I want to leave, to go somewhere where I should be really in my place, where I would fit in . . . but my place is nowhere; I am unwanted.” ― Jean-Paul Sartre, Nausea

Although these photographs are devoid of an entire human figure there is still a sense of identity prevalent, an identity that is universally applicable, something to which we can all relate to on one level or another.  But this work seems to go deeper; its visual literacy seems to be pressing at notions of splitting.  Also there is nothing cohesive to this space even though there is an heir of order and symmetry.  It’s almost as if the theatricality of the décor is acting as a protective shield against stimuli, dampening external excitations blanketing underlying traces of trauma and tension.

Text by Alana Lake (Artist, Curator and founder of Our Dark Chamber)